It began in elementary school. It didn’t make sense then, but it does now. The stomach aches. The crying episodes. No one knew what was causing my frequent nausea. I couldn’t even tell you, but I know now that I was suffering from anxiety. When I got to middle school, the bullying began. I wrote a silly portrait of a classmate, a former crush, and the joke turned into 6 months of persistent harassment. If I actually made it to school more than once a week, I would usually end up in the nurses office. The problem resolved the day I went to the vice principal and filed a sexual harassment report. Things were a little easier come high school. My awkward teenage looks began to fade and not used to positive attention, I just became even more insecure. My mental health took a nosedive when my dad got sick with kidney disease. A diabetic who had survived a stroke three years prior, I will never forget the day I walked to school as the ambulance transporting him sped past me. I didn’t know if my dad was going to be alive when I came home. My dad’s health fell into our hands and while mom worked, my sister and I were his caretakers. I didn’t know many 14 year olds who had to clean their father’s soiled jeans. Though embarrassed by the condition he was in, he always made sure to let us know he appreciated us. “Thank you Slamanac,” he’d tell me, using made-up language we called Fredenese. It was not a normal thing for a teen to have to do, but it was my normal. My sophomore year, I became very depressed. Skipping class and purposely having to spend the hour in study hall. It got to the point where I considered dropping out. I was concerned I’d waste my mom’s money and fail the exit exam. I decided that I would sign up for a special school through a local community college. The classes were college study focused. I ended up not going there either. My friends had helped me make that decision. By some miracle, I did end up graduating with the rest of my class in 2006. I had no real goals for the real world. By 22, I had been working in pediatrics for the last four  years and the real world was starting to take its toll on me.
I was having anger outbursts at work and one morning I just broke down. After crying to my mom and manager, I called my doctor and made an appointment quickly. I failed two weeks of Paxil but soon found relief with Celexa. Although I was more pleasant minded, in a year’s time, I had gained twenty-five pounds. I went off the medication and started focusing on working out. I was off antidepressants for more than four years when my dad passed away in 2015. Beside myself with grief, I finally made the call in May to schedule with a therapist. By July, I was meeting with a psychiatrist who put me on Lexapro. It felt as though my mood changed like night & day. I was more social, confident and stronger. The Lexapro ran its course within a year and I’ve been on Venlafaxine ever since. I’m also seeing a therapist again. I have been diagnosed with generalized anxiety disorder, major depression disorder, attachment disorder, codependent. My family and I are very close and are very supportive of each other and our individual disorders. My poor mom, she’s the only sane one.

Because of my sister’s recent hospitalization (more on that next week), I became even more passionate about my desire to help normalize mental illness. The idea for this blog came to me the morning after I watched a video of Lady Gaga and Prince William speaking about mental health stigma and how no one should feel shamed for suffering from a mental illness. I want this to be an interactive format. Each week will feature a different person’s story. Whether you live with the disease or knew someone who did and how it affected you. If requested, you can remain anonymous. Include a photo if you’d like to:

There is no minimum or maximum amount of words required.

Continuing to bring awareness to how common mental illness is, we can help break the stigma attached to it. 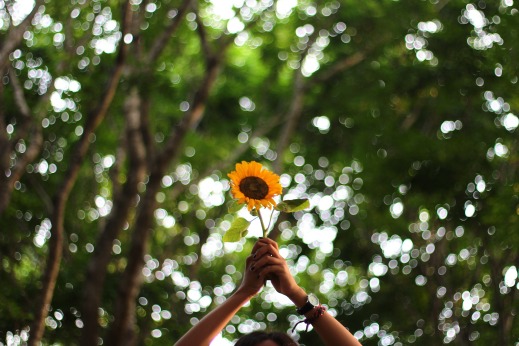 2 thoughts on “Standing tall as a sunflower – Kim’s Story”